Fantasy fans are heading back to Middle-earth with the release of the highly-anticipated TV series ‘The Lord of the Rings: The Rings of Power.’ Which means New Zealand’s real-life fantastical landscapes are taking center stage as the backdrop for the epic new series.
Of course, this isn’t the first time that film-makers have found that the unique and diverse geography of New Zealand is the nearest thing on Planet Earth to J.R.R. Tolkien’s imaginary world of Middle-earth. The country also had a starring role as the location for The Lord of the Rings Trilogy and The Hobbit.
As you immerse yourself in a new Tolkien epic on screen, or re-visit past favorites, watch out for these locations on New Zealand’s North and South Islands. Or take a pilgrimage to New Zealand to experience these real-life stand-in's for fictional locations for yourself.
Fiordland National Park, Fiordland
The Rings of Power, The Hobbit, and The Lord of the Rings Trilogies used the majestic Fiordland National Park for epic scenic shots. If you visit the park, you can experience its giant fiords and spectacular waterfalls on a helicopter flight or boat cruise. The grasslands of Te Anau Downs provided the backdrop for chase scenes, while Mararoa Saddle doubled as the wildlands through which Thorin leads the dwarves. 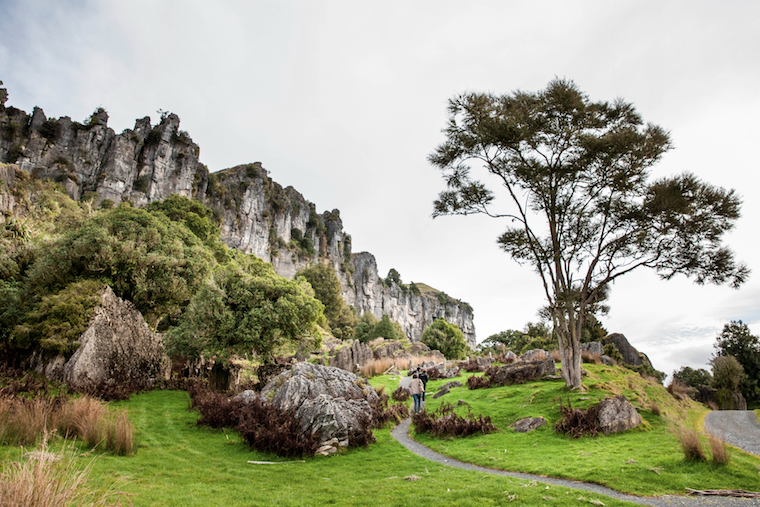 Piopio, Hamilton, Waikato
Piopio, with its picturesque landscapes and rolling farmland, is the perfect place to base yourself to explore the nearby attractions.
Just 30 minutes from the world-famous Waitomo Caves, the Piopio area also boasts dramatic limestone formations, forest walks and cycling routes. Stay in the small village of around 400 people and experience true Kiwi hospitality and try a locally-made berry ice cream at the Piopio orchard.
The area is probably best known as a filming location for The Hobbit: An Unexpected Journey. The Denize Bluffs were used for a number of scenes, including Trollshaw Forest. 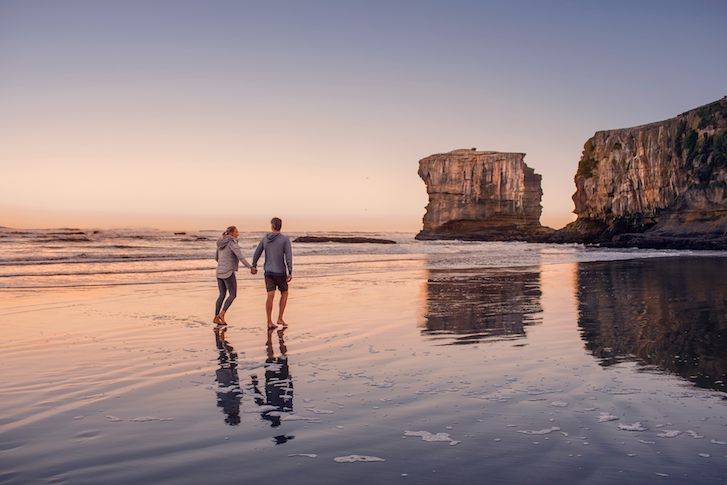 Muriwai Beach, Auckland
A 40-mile, windswept rugged coastline, interrupted only by streams and rivers, makes Muriwai one of New Zealand's most spectacular black-sand surf beaches. You can hire blokarts, bikes and kites or simply take a stroll along the boardwalk that hugs the coastline and get a dose of fresh ocean air.
Putangirua Pinnacles, Wairarapa (pictured, top)
Around seven million years ago, the Aorangi Range was an island. As the mountains eroded, scree and gravel were washed down to the coast, where they formed a sedimentary layer. Over the past 120,000 years, the Putangirua Stream has exposed this ancient layer of gravel to the erosive forces of rain and floods. Some of the sediments stayed concreted together, while others washed away. The result is the Putangirua Pinnacles 'an amazing collection of hoodoos'.
This outlandish place was used as a filming location for the 'Paths of the Dead' scene in the Return of the King, the third movie in the Lord of the Rings trilogy.
Three routes lead to the Putangirua Pinnacles or the lookout and all start from the streambed. From here, you can take the loop track junction and on to the lookout above the Pinnacles.
Kahurangi National Park, Tasman District
In the Māori language, Kahurangi means 'treasured possession', a clue to the attractions of New Zealand's second largest national park. Within its boundaries lie some of the oldest rocks, strangest plants and rarest birds in the country.
While much of the park is untracked wilderness, other areas are laced with a network of walking tracks that allow you to explore high plateaux and coastal palm forests. The Heaphy Track is the park’s most famous and accessible treasure, followed by more than 4000 walkers each year.
A ‘Great Walk’ by every definition, the track covers 50 miles of subtropical rainforest, tussock high country, river valley, and coast. For hundreds of years, the route was used by local Māori tribes on their way to the pounamu (greenstone) resources of the west coast.
Aoraki Mount Cook National Park, Mackenzie
The Mackenzie region is home to many high-country farms, dry tussock plains, stunning blue alpine lakes and jagged mountain ranges. Lake-town - one of the most extensive outdoor sets built for The Hobbit Trilogy - was created at Tasman Downs Station on the shores of Lake Pukaki. The whimsical lakeside village set sits over water incorporating clusters of two-storey wooden dwellings arranged around connecting walkways, waterways and wharves - all featuring the highly detailed style that Peter Jackson is recognized for.
One of the best ways to experience the majestic landscape is on scenic flights that offer an unending panorama of mountains, lakes, glaciers, and the oceans on either side - the Tasman Sea on the rugged West Coast and the Canterbury Plains fringed by the surging Pacific Ocean. There are also options for landings on glaciers and snow, or cross-country tours by 4WD and Argo, and glacier exploring by boat. 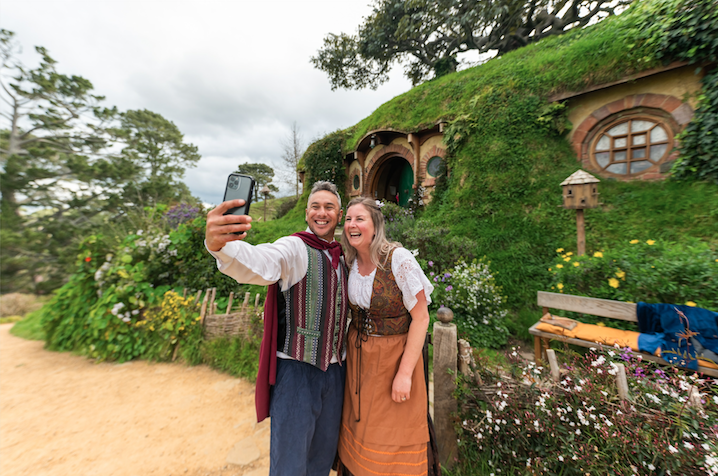 Hobbiton Movie Set, Hamilton, Waikato
In the heart of the Hamilton-Waikato region, explore the lush pastures of the ‘Shire’ with a guided walking tour of Hobbiton Movie Set, as featured in The Lord of the Rings and The Hobbit Trilogies. This privately-owned family farm was spotted by Sir Peter Jackson in 1998 during an aerial search for filming locations for the Lord of the Rings Trilogy.
Mature pine trees in front of a picturesque lake with surrounding landscape, untouched by the clutter of modern life, perfectly resembled the Shire as described by author J.R.R. Tolkien. It became the famous setting for Hobbiton and was rebuilt in 2011 for The Hobbit Trilogy to remain a permanent tourist attraction. There are 44 Hobbit-holes on site that have been rebuilt exactly as they appeared on film. 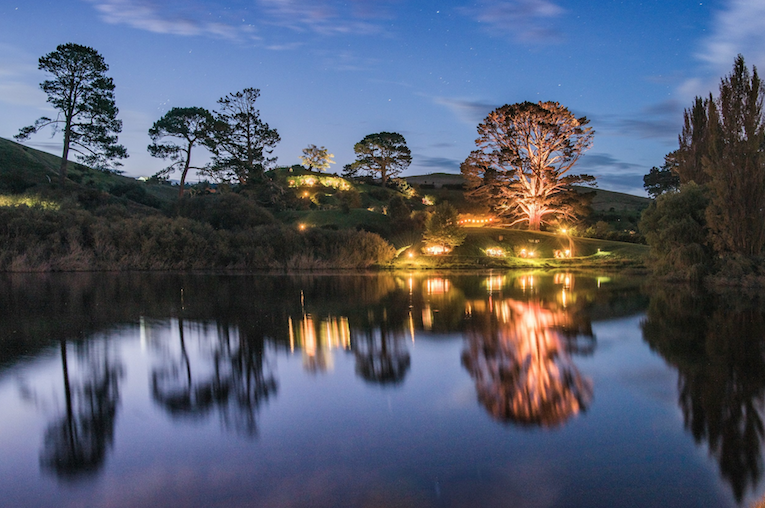 Images courtesy of Tourism New Zealand
Top image credit bennyjain
Muriwai Beach credit Chris McLennan
All rights reserved. You are welcome to share this material from this page, but it may not be copied, re-published, broadcast, rewritten or redistributed.